28 °C
View The move to Egypt on lucid's travel map.

My husband and I arrived in Istanbul after a pleasantly short flight from Cairo. We were met at the airport by the hotel pick up service and started the 40 minute drive to Sultanahmet. I was instantly impressed by the well maintained roads, sensible drivers and European styled buildings. The taxi driver pointed out some interesting geographic features and informed us about some events we could attend while we were in town. We stayed at the Hotel Turkoman, which is only a stone's throw away from the hippodrome and Blue Mosque. As we found out later we were also only a stone's throw away from the speaker for prayer call!
The hotel was quiet, with old style furniture and quaint rooms. It provided breakfast and you could buy a beer in the evenings and sit out on the narrow roof top area, which overlooks the Blue Mosque. The hotel was in a great location and within walking distance to many of the tourist spots.

My husband and I were impressed with the cleanliness of the parks and public areas and there were some great shopping areas and restaurants.

We had a pre-departure meeting the evening before the overland trip started. We were hoping that the tour leader would have some information from Kumuka about our visa situation but he didn't know anything about my husband's visa problems for Syria. the other American guy on the trip had managed to get himself a Syrian visa from the embassy in Washington DC, but at a cost of over $300!
The trip started early the next day after we loaded our things onto the truck and left Istanbul. It was a long, but scenic drive to our first night's camp on a beach outside the 'Boomerang Bar'. It was a difficult night's sleep, on a windy and rough beach, not helped by the bar owner and his local customers' attempts to sing kareoke at 2am. This was pretty much the worst place we had to camp during the whole 35 day trip.

Day 2 of the trip, sitting on a car ferry, crossing over to see Troy. It's been an uneventful few days, which is why I haven't written until now. I've also had two nights of extremely bad sleep so that's not helping things.

Going back then to my first evening in Istanbul. We strolled down to the local shops and restaurants and had a really good meal at a place up one of the narrow alleys. After that we had a drink on the roof of the hotel and then had an early night. The next day was very busy... We saw the Hagia Sofia (an ex-Christian church turned mosque) followed by the Grand Palace, the Grand Bazaar and finally we walked around the spice bazaar. The Agia Sofia was large and impressive, with beautiful mosaic pictures and stained glass windows. My first thoughts however, were that it had been invaded and spoiled. The huge Islamic wooden discs that hung over the Christian art made the whole church feel like Christianity had been thrown out but only a feeble attempt had been made to convert it into a mosque. It was very damp inside the Agia Sofia and many of the art works were being removed to prevent further decay.

The Middle East is not high on everyone’s list of holiday destinations and with the multitude of revolutions happening across the region this year; it seems surprising that an overland trip through Turkey, Syria, Jordan and Egypt was even possible a year ago. It’s taken me 9 months to get around to writing about my trip. The reasons are that I’ve been busy, parts of the journey did not fill me with a need to write about them and somehow I seem to collect my thoughts better when I’ve had a while to ponder over everything.

So the trip began early on our fourth day in Istanbul. We had had a pre departure meeting the evening before to let us know what we would be in for and to meet our fellow travellers. At around 5am we met at the truck, put our bags away and climbed onto the vehicle that would be our transport, living room, kitchen and dining room for the next 5 weeks. My husband and I had done it all before in Africa and this journey was set to be a bit more luxurious than our last overland trip, since we would be spending a fair proportion of our time in hostels rather than camping.

We said goodbye to Istanbul and set off on the first of many long drives to a beach campsite near Gallipoli. That afternoon we set off for Gallipoli, an area I knew nothing about before I went. During the first World War there had been a battle with the Turks vs. Brits, Americans, Australians and Kiwis. Many people died and the graves of those killed are preserved and maintained today. If I’m honest, the story of Gallipoli did not interest me much but the view high up in the hills was worth seeing.

After a two and a half hour guided tour we returned to the beach to prepare dinner. That was probably the worst place we had to stay for the whole trip. We had to camp on a stony beach, near to a ‘bar’, run by a guy who liked to drink and play loud music into the early hours of the morning.

The next day we set off to catch a ferry across to the area near Troy. The archaeology for Troy is pretty simplistic and most people seem to find the fake wooden Trojan horse the most exciting part of their visit. As a former Ancient Historian I should have been more fascinated by it all but Troy merely reinforced my belief that archaeologists have creative imaginations. 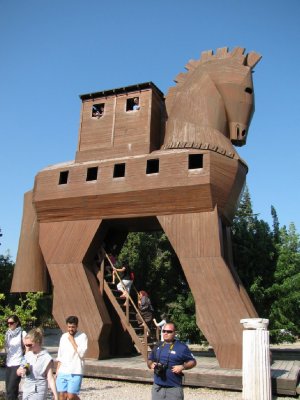 After Troy we continued on our way to the pleasant town of Selcuk. We stayed in a nice hostel (although my husband and I ended up with a room we imagined must once have been a cupboard!) and had two nights to explore the area and catch up on some well earned sleep. Our first morning was spent at the amazing Roman site of Ephesus. I had heard good things about this site before but until you see it for yourself it is hard to understand the magnitude of the settlement. Ephesus comes alive as you walk down the cobbled road past a theatre some shops and a bath house on the way to the beautiful library façade. Our guide was full of information about the site and pointed out many small but interesting details. 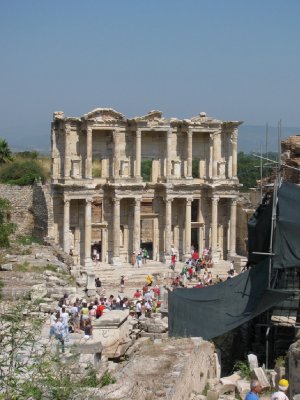 That afternoon we had free time to ourselves. We had a kebab for lunch, walked around town, took a nap and waited for dinner at the hostel. That evening we went out for drinks at the local pub and played some ridiculous game with the group that involved us having to make animal noises and hand signals!

From Selcuk we continued South to a town at the base of a huge valley called Olympos. The vibe of this place was completely relaxed and unpretentious. The main road was lined with wooden cabins, shops and restaurants, interspersed with trees and greenery. As soon as I looked up at the mountains here I felt sure that the ancient Greeks had imagined this place to be the home of the gods, not the unimpressive town in Greece of the same name.

After dinner on the first night at Olympos we played our biggest game of ‘salad bowl’(a game where you write down words beginning with the same letter, and spend different rounds describing, acting out or using one word to help you team guess the word). Some of the others went out to a club that night but we went back to our wooden hut and had an early night.

About 15 minutes walk from our accommodation was a pathway and a little stream to the beach. The next morning we all decided to go sea kayaking so we set out from this area along the coast for what turned out to be a mammoth 10km excursion! I had never kayaked before and it was not easy, especially at the pace the others had set. On the way back we were rowing against the current. When we started to hear thunder we all became a little worried and mustered what little strength we had left to make it back to shore before the storm came.
We were all miserable and aching after the kayaking and spent the rest of the day and night relaxing in the cushioned gazebos back at the hostel.

We set off at 9am the next morning for the next part of our journey, which took us down the coast to the pretty town of Kas. We camped at a nice campsite with good facilities and a rocky beach. Access to the water was from the rocks or a small jetty. It was really picturesque but not for poor swimmers. We ate at a good seafood restaurant that evening and I went for a walk through the shopping area with some of the girls from my group after we had finished eating. 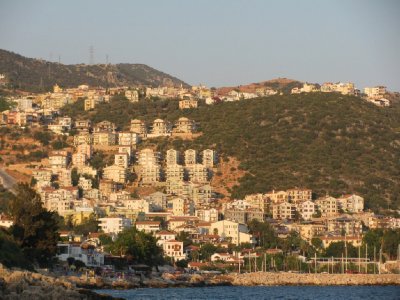 Kas is a very touristy town and shows obvious signs of investment. The shops here are great although the budget traveller would not be able to afford to buy much of the beautiful clothing, shoes and jewellery on sale. A pleasant evening stroll turned into a rather eventful evening.

One of the girls I was with started to get pains in her stomach so we started to walk back to the campsite. By the time we got there she was quite sick and our tour leader decided to take her to the hospital down the road. At this hospital the doctors and admin staff spoke no English and my friend had to use a phrase book she had with her to communicate with them.

As time went on the girl’s pain got worse but without receiving the results of a blood test the doctors would not treat her with anything. The hospital was smelly and unhygienic which did not help the girl in pain, who was getting gradually more hysterical. After 3 or 4 hours the doctors diagnosed the girl as having kidney stones. They gave her some pain killers but couldn’t do anything more to help. She travelled on with us until Cappadocia, but then she cut her trip short and flew back home to Canada.

Our final destination in Turkey took us East into Cappadocia and a town called Goreme. Cappadocia has some of the most striking stone formations I have ever seen. Every part of the landscape is beautiful and the stone houses, that were lived in for thousands of years are amazing. 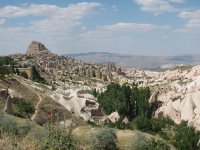 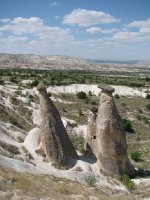 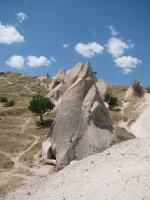 We stayed at a lovely little hostel called Flintstones. We were all crammed into the musty cave in the basement of the hostel but what it lacked in comfort it gained in charm. Over the next two days we went on excursions to the pottery workshop, underground city, Winery and to many beautiful vistas, overlooking the strange rock formations. Many of the rocks have a rather phallic shape which prompted many jokes and some interestingly posed photos.

On the final morning some of the group went ballooning at dawn before saying goodbye to some of the people leaving the trip, including my husband who had failed to get a visa for Syria, and was heading back to Egypt until we met up again in Jordan.

Previous Next Table of contents

This blog requires you to be a logged in member of Travellerspoint to place comments.

If you aren't a member of Travellerspoint yet, you can join for free.