28 °C
View The move to Egypt on lucid's travel map.

My husband and I arrived in Istanbul after a pleasantly short flight from Cairo. We were met at the airport by the hotel pick up service and started the 40 minute drive to Sultanahmet. I was instantly impressed by the well maintained roads, sensible drivers and European styled buildings. The taxi driver pointed out some interesting geographic features and informed us about some events we could attend while we were in town. We stayed at the Hotel Turkoman, which is only a stone's throw away from the hippodrome and Blue Mosque. As we found out later we were also only a stone's throw away from the speaker for prayer call! 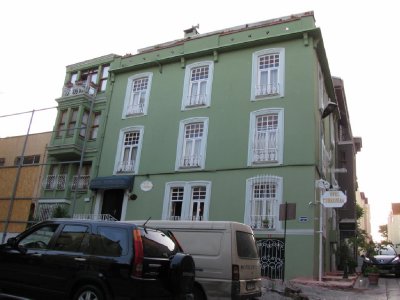 The hotel was quiet, with old style furniture and quaint rooms. It provided breakfast and you could buy a beer in the evenings and sit out on the narrow roof top area, which overlooks the Blue Mosque. The hotel was in a great location and within walking distance to many of the tourist spots. 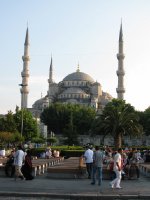 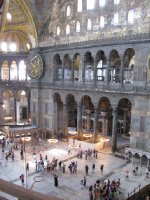 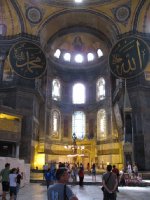 My husband and I were impressed with the cleanliness of the parks and public areas and there were some great shopping areas and restaurants.

We had a pre-departure meeting the evening before the overland trip started. We were hoping that the tour leader would have some information from Kumuka about our visa situation but he didn't know anything about my husband's visa problems for Syria. the other American guy on the trip had managed to get himself a Syrian visa from the embassy in Washington DC, but at a cost of over $300!

The trip started early the next day after we loaded our things onto the truck and left Istanbul. It was a long, but scenic drive to our first night's camp on a beach outside the 'Boomerang Bar'. It was a difficult night's sleep, on a windy and rough beach, not helped by the bar owner and his local customers' attempts to sing kareoke at 2am. This was pretty much the worst place we had to camp during the whole 35 day trip.

Day 2 of the trip, sitting on a car ferry, crossing over to see Troy. It's been an uneventful few days, which is why I haven't written until now. I've also had two nights of extremely bad sleep so that's not helping things.
Going back then to my first evening in Istanbul. We strolled down to the local shops and restaurants and had a really good meal at a place up one of the narrow alleys. After that we had a drink on the roof of the hotel and then had an early night. The next day was very busy... We saw the Hagia Sofia (an ex-Christian church turned mosque) followed by the Grand Palace, the Grand Bazaar and finally we walked around the spice bazaar. The Agia Sofia was large and impressive, with beautiful mosaic pictures and stained glass windows. My first thoughts however, were that it had been invaded and spoiled. The huge Islamic wooden discs that hung over the Christian art made the whole church feel like Christianity had been thrown out but only a feeble attempt had been made to convert it into a mosque. It was very damp inside the Agia Sofia and many of the art works were being removed to prevent further decay.